In May this year I was asked to make an artwork for the Oncology Unit at St James’s Hospital in Dublin.

Called ‘The Wave’,this takes the form of a set of ceramic panels with different images relating to a bluebell wood, a river and its wildlife. It includes images of foxes, wrens, herons, migrating fish, swallows returning in the spring, dancing dogs and flocks of lapwing and swans.

The wave represents the river (wards being named after rivers), the waves which make up radiation and the fact that water is important in the treatment.  This artwork is sited in a number of different places, in corridors towards the radiation area and in the corridor towards the entrance to the unit and in total is 22 m long. 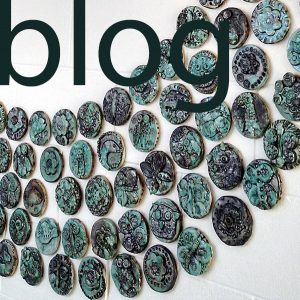